Get fresh music recommendations delivered to your inbox every Friday.

by Kaiser and the Machines of Creation 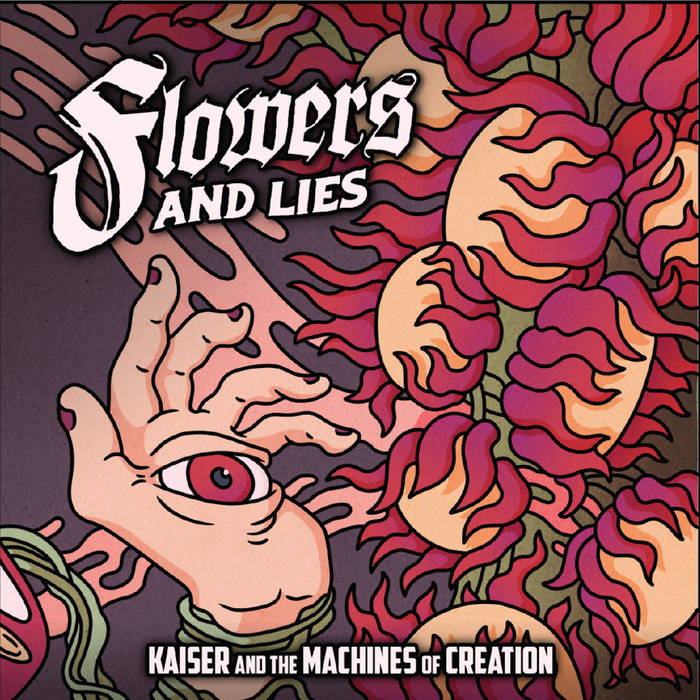 Shannon from High Fidelity on WOWfm

FV Music Blog: "...the team have done an excellent job in creating a piece of art that will stand the test of time."

Eat This Rock website: '"...an enjoyable piece of melodic metal that is strongly reminiscent of Queensryche, but with many original elements in the sound"

The Other Side Reviews: "...a classic rock blast...with melodic guitars (and) soaring vocals..."

WUD Records: "Wonderful song writing! Reminds us a little of Prog bands like The Enid and classics like Bowie and early iron Maiden".

This is Flowers and Lies, the debut album for this line-up of Australian hard rock sensations, Kaiser and the Machines of Creation.

Primarily recorded in late 2018 to early 2019 with additional tracks recorded in 2020, the band is now able to bring you the physical release of the album.

"Finally! Here it is....the release of our album, ' Flowers and Lies '.
It's been such a long time getting this to fruition, but we are excited to be able to now present it in it's intended state.

All 9 songs in their conceptualized form and running order, but we would also be thrilled if you were to even just grab a song or two that caught your ear!
Come in. Welcome to the Machine. There is something for everyone.

We'd love your support and hope you enjoy the music!"
KMC3

KAISER and the Machines of Creation are:

PAUL KAISER - guitar and vocals
*Bass, Keyboards, Programming on ‘It’s all a Lie and Not Tonight, Josephine’ which were recorded, engineered and mixed by Paul in his home studio.
STEVE ANDERSON - bass
MATT REDMOND - keyboards and grand piano
SIMON TIMOSHENKO - drums and percussion

with Special Guests
Jennifer DeGrassi – Harmony vocals on ‘Flowers and Lies’, ‘We’ll Climb the Mountain’, ‘Blown Away’, ‘Who Decides’, ‘It’s all a Lie’ and ‘Not Tonite Josephine’.
Alex McLeod – Saxophone solo on ‘Who Decides’
James Balderston – Tambourine on ‘It’s OK to Wake Up’.

All tracks (except ‘It’s all a Lie’ and ‘Not Tonight Josephine’) were recorded at Ghostnote Studios in Adelaide -Australia,
November 2018 through to February 2019.

Mastering Engineers
Leon Zervos - ‘Flowers and Lies’, ‘Not Tonight Josephine’, ‘Blown Away’, ‘In the Mist’ and ‘It’s all a Lie’.

Kaiser and the Machines of Creation Adelaide, Australia

"'KAISER and the Machines of Creation' is the brainchild of Australian songwriter/vocalist/guitarist, Paul Kaiser.
Now, in it's third incarnation, the outfit has released it's debut album, 'Flowers And Lies'. The nine song release is an eclectic mix of soaring, melodic, hook-laden classic hard rock, expertly blended with the roar of the new.
Welcome to the Machine!". ... more

Bandcamp Daily  your guide to the world of Bandcamp

Kari Faux drops off her deluxe album 'Lowkey Superstar' plus tunes by Shunaji and Samplelov.